Determining custody arrangements after divorce can be one of the most important decisions made about a child. Arizona’s child custody law is the first of its kind in the United States to abolish the traditional idea of “visitation” and replace it with a presumption of equal parenting time. 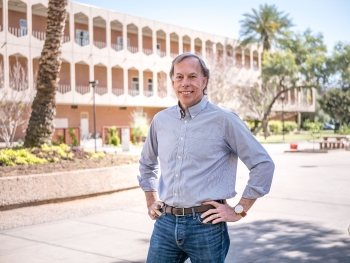 “Arizona judges start out presuming that a child will spend 50% of the time with mom and 50% with dad, unless there is evidence that makes that arrangement inappropriate,” said Fabricius, an associate professor of psychology at ASU.

The government of Japan is currently studying whether to update their child custody laws, so the Japanese Ministry of Justice sent a representative, Ryusuke Kurashige, to Arizona to learn about the developmental psychology research that served as the foundation for the state’s 2013 child custody law.

While Kurashige was at ASU, he and Fabricius discussed findings from decades of research on children of divorce. ASU undergraduate Megan Russell also shared her honor’s thesis research project, which tests whether voluntary surveys accurately assess the mental health of ASU students with divorced parents.

“The opportunity to explain my research to a member of another country’s government was a wonderful experience,” said Russell, who is a senior in Barrett, The Honors College.

Fabricius also helped organize a statewide series of meetings for Kurashige so he could learn how Arizona’s child custody law works. Kurashige visited the family court in Pinal County and conversed with family court judges, attorneys and conciliation court officers from across the state.

Kurashige said his meetings demonstrated that Arizona’s law has widespread support, and he anticipates that learning how important parenting time is could lead to more co-parenting in Japanese divorced couples and possible changes to Japanese family law.

Fabricius started studying the effects of divorce from the perspective of children in the mid-1990s. He interviewed college students of divorced parents and found the students overwhelmingly thought that living with each of their parents for equal amounts of time was best.

The long road to the new state custody law began soon after, when he was interrupted during a lecture to family court employees.

“I was asked to give a half-hour talk on basic child development. I started my talk by saying that developmental psychologists had known since the early 1980s that infants become attached to their fathers as much as they do their mothers,” Fabricius said. “They stopped me in my tracks, and I could not get past that point.”

The talk inspired him to change the fact that the people in charge of child custody decisions were unaware of findings in developmental psychology.

“Developmental psychologists should offer to provide training in current research to the family law communities in their states,” he said.

Changing Arizona’s child custody law took more than a decade of work. Fabricius started by sharing research findings with the state, national and international family law communities. He also served on the board of the Arizona chapter of the Association of Family and Conciliation Courts and was appointed by the governor to the Domestic Relations Committee of the Arizona legislature. In 2008, the committee appointed Fabricius chair of the Ad Hoc Custody Workgroup. The workgroup brought together judges, attorneys, conciliation court directors, mental health providers, anti-domestic abuse advocates, fathers’ rights advocates and parents to consider how to overhaul Arizona’s child custody statutes.

The bill the Ad Hoc Custody Workgroup wrote became law in 2013, with bipartisan support and near unanimous votes in both houses of the Arizona state legislature.

“From the beginning, we decided to be research-focused,” Fabricius said. “It took more than 40 meetings, 40 months and 40 individuals to change the law.”

Before beginning his efforts to change the state custody law, Fabricius joined forces with ASU psychology professors Linda Leucken and Sanford Braver and with Sandra Day O’Connor College of Law Professor Ira Ellman. These partnerships led to the discovery that not only was spending time with both parents important to children of divorce, it was also a public health issue. Fabricius and his collaborators kept finding that maximizing time with both parents is linked to better physical and mental health for children.

“It is high-quality parenting, regardless of gender of parent, that is critical to promoting a child’s well-being following divorce,” said Irwin Sandler, Regents’ Professor emeritus and research professor of psychology. “But, parents need adequate time with their children for their quality of parenting to have an impact.”

Poor relationships with parents are linked to many adverse outcomes later in life, including early mortality.

“If a child from a divorced family has equal parenting time, they can have relationships with both their parents that are as good as those in intact families,” Fabricius said.

“Professionals and parents are hungry for current research about custody,” Fabricius said. “And every western European state is debating whether it is a good idea for children of divorce to spend equal time with their fathers and mothers.”

In March, Fabricius will travel to Denmark to speak to the Danish Parliament about Arizona’s child custody law and his research into the effects of divorce on children.